When Divorce is Better for Children 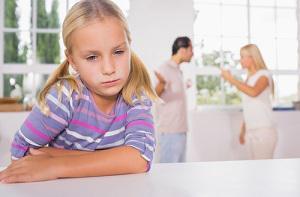 There is no shortage of information and research into the effects of parental divorce on their children. For many years, conventional wisdom stated that children who did not grow up in an “intact” home, in which their parents were together, serving as an example of commitment, devotion, and partnership, that the child would grow up without a firm grasp of those concepts, unable to find those things in his or her own world as an adult.

As divorce rates hover at about 50 percent of all marriages and the social stigma of marital dissolution continues to fade, this conventional understanding of how divorce effects children does too. Some divorcees even believe that their relationship with their children—as well as their children’s independent psyches—is actually improved after divorce.

The first reason is an obvious one: if you and your spouse fight often or hard, whether or not there is physical violence, it can create an environment that is not stable enough for children. Children need calm and security—if the house in which they live is never secure or stable because of their parents’ constant bickering, the children will never be able to understand such concepts. Sometimes breaking what was thought to be stable is the best way to provide stability.

Another reason that divorce can be good for children is that it can actually improve the individual relationship of each parent with the child. When parents are so involved in their arguing and their private drama that divorce is just around the corner, it can limit their interaction with and intuition for their children’s needs. In some cases, if a couple has two children, one child may end up having a disparate relationship with one compared to the other parent because the parents cannot be in the same place at the same time without arguing. When one parent is removed from the situation, it often allows for the child to develop a stronger relationship with the parent left behind.

It should not be misunderstood, however, that children who have the option of living with both parents, in an “intact” home, do experience benefits of such a childhood that children of divorce may not. Again, children are much more sensitive to conflict than adults. As such, if it is possible to have a meditated divorce that does not result in nasty court battle that can create more drama than otherwise, it is definitely preferable when there are children involved.

If you or someone you know is considering divorce, the most important step is to seek legal counsel. Do not go through it alone. Contact an experienced Batavia, IL family law attorney today.