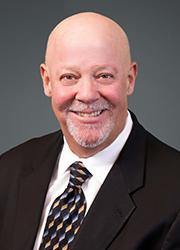 Van A. Larson is the President of and principal/sole attorney at the Law Office of Van A. Larson, P.C. in downtown Batavia, Illinois. Van received a Bachelor of Arts in political science from Drake University in Des Moines, Iowa, and later received his Juris Doctorate from the John Marshall Law School in Chicago, Illinois. Van A. Larson was admitted to the Illinois Bar and the U.S. District Court of Northern Illinois in 1978. Since then, he has gained more than 39 years of litigation experience in nearly all courts throughout Kane, Kendall, DuPage and DeKalb counties.

Van’s career began as a prosecutor working with the Kane County State’s Attorney’s Office. Later, he was appointed by the Judiciary to serve as one of the county’s first Special Conflict Defenders. With gained trial litigation experience afforded by these positions, an increased ability to successfully manage conflicts which arise in legal settings has become most beneficial to his success in his current practice as a family law, criminal defense, and real estate attorney.

Giving credit to whom it is due, Van gratefully acknowledges the pragmatism, insight and perspective afforded him over the years by his wife and former law partner, Judge Karen Simpson.

Van A. Larson is a proud member of the Illinois Bar Association, the Kane County Bar Association, the Township Attorneys of Illinois, and is the attorney for Batavia Township Board of Trustees since 1985. Van has provided pro-bono for Prairie State Legal Services as a Family Law Referrals attorney. His commitment to provide on-on-one, personalized attention to each client he represents enable him to develop a strong case on behalf of his clients and to achieve the most favorable results attainable in each circumstance.

Van A. Larson always gives 100% every time he is called upon when representing his clients.

Past Affiliations and Employment